An interview with Alexi Keywan 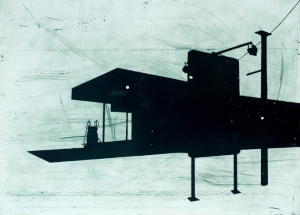 Alexi Keywan is a Sydney born artist who currently resides in Lismore, Australia.

Her work depicts familiar environments that she deftly instils with an intriguing eeriness.

Recently Alexi took the time to provide me with an insight into her practice and other interests.

Alexi Keywan, The Passenger No. 11, pen on paper

Rona: Your art practice includes printmaking, painting and drawing. What do you like about working with a variety of different materials and techniques?

Alexi: The ability to make marks and create images from each medium that are unique to themselves – they all have different ‘atmospheres’. Each medium affords me a different kind of headspace.

R: Who has influenced and inspired your art?

Also lecturers and staff from National Art School, Sydney, particularly from the Print department (where I became a part of the furniture after seven consecutive years).

R: When you are making art do you prefer to work in silence or be listening to something?

A: Ever since I can remember, making any kind of art has enabled me to retreat from the world and create my own. I can’t imagine not having a ‘soundtrack’ to this. I think in art school I garnered a reputation as being busy and unapproachable due to the music driven print frenzies I’d get in to. At the moment it’s Frank Sinatra on the way to the studio and then something like Dirty Three or Godspeed You! Black Emperor.

Alexi Keywan, The Passenger No. 12, pen on paper

R: What are a few of your favourite things?

A: Solo road trips, travelling, boxing, tattooing and being tattooed, taking photos of concrete and steel.

R: Do you have a favourite gallery or museum?

A: I pretty much grew up in The Australian Museum (Orest worked there), and gallery wise it really depends on what is on.

R: What about your favourite art making material?

A: Etching copper because of the variables involved, but then on another day it could be drawing… or painting.

R: And your favourite food to eat after a big day in the studio?

Finally, congratulations Alexi on recently winning the 13th CPM National Print Award with your etching, You Are Here. 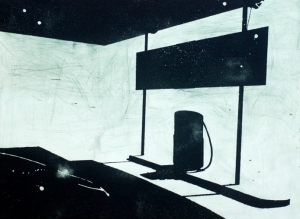 Alexi Keywan, You Are Here, etching

Alexi will be exhibiting prints and drawings at Australian Galleries, 35 Derby Street, Collingwood, VIC, 3066, from 27 August to 15 September 2013.

You can also view Alexi in conversation with Michel Lawrence from The Stock Rooms on YouTube: